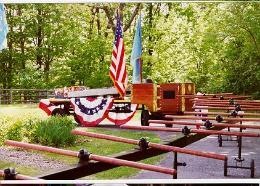 STONEWALK 1999  began with the one-ton granite stone which was placed on the grounds of The Life Experience School / Peace Abbey in 1992 where it was unveiled at a ceremony which Muhammed Ali participated in. The stone is a memorial to those people around the world who tragically lost their lives in the course of military conflicts.

For years, the Memorial called The Life Experience School / Peace Abbey in Sherborn, Massachusetts its home. Over a period of years, it became clear that the stone must share its mission with the people of the United States … it went without saying that it should be taken to Arlington National Cemetery to serve as a reminder of the true cost of war. Arlington is known around the country as the home of the Tomb of the Unknown Soldier and a place where the people go and mourn for those who died in military conflict – American men and women of the four branches of military service. No mention is made of the civilian loss of life which number 9 out of 10 casualties in war. In fact, there is no official place in America where citizens can pause, reflect and mourn for civilian victims of war — men, women, and children. 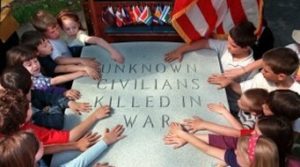 On July 4, 1999, a team of people from The Life Experience School and Peace Abbey took the one-ton stone, mounted it on a “caisson”, a cart that was made just for this purpose, and pulled it 500 miles in 33 hot, summer days from Sherborn over hundreds of hills and severe, black asphalt to Arlington. As the caisson went through the cities and communities of the east coast, townspeople joined in, either by cheering the walkers on, by offering them water, or by joining in, taking a handle and helping to pull the stone. 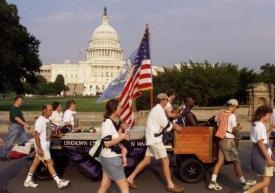 The stone made it to Arlington, but once it arrived, it was not allowed into the cemetery. Now the stone is on a mission to travel the world, bringing its message to communities everywhere that have been touched by the effects of war. This journey beyond the United States started on July 5, 2000, in Ireland and continued through England, Japan, and Korea.

The fourth stone remains on the grounds of the Pacifist Memorial in Sherborn which is owned and under the care of The Life Experience School.

In 2004, September 11th Families for Peaceful Tomorrows joined with the Peace Abbey to conduct a Stonewalk to New York City.