“The overwhelming feeling I have is of the rightness of the monument there, and of its power, and that it is and will continue to be a potent seed-planter for peace, vegan living, and inspiration for a world beyond war and injustice.”

Emily the Cow gained international attention after escaping a Hopkinton slaughterhouse in 1995. 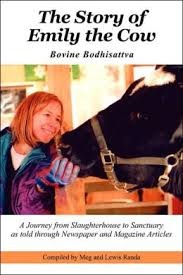 Emily’s gentle and loving nature imbued us all with a better understanding and respect for all creatures with whom we share this planet. This is her legacy. Emily’s spirit will live on in the hearts of minds of those who were touched by her grace and beauty.Hair clippings from Emily’s markings on her forehead and from the tip of her tail, traces of her blood and a piece of golden thread (placed through Emily’s ear by Hindu priest Krishna Bhatta of the Lakshmi Temple) were released into the holy river Ganges in the city of Benares, India. Abbey members Bram and Elizabeth DeVeer organized and assisted the Temple priest in this traditional sacred cow ritual on the Ganges River in April 2003.