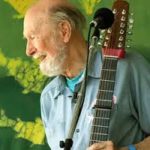 The Peace Abbey Foundation, in conjunction with the Life Experience School, honors individuals and organizations that are recognized internationally for their humanitarian and peace activism, along with local, grassroots, unsung heroes of social change. The Peace Abbey supports and encourages the noble work of individuals and groups who are, all too often, too little known, by bestowing on them the same recognition and award that Mother Teresa, the Dalai Lama, Rosa Parks, Muhammad Ali, Pete Seeger, Maya Angelou, and many other extraordinary individuals have received at Peace Abbey sponsored events and ceremonies.   L’Arche Communities were the most recent recipient who received the award in France on September 27, 2016. 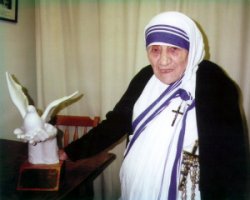 Mother Teresa received the 2000 Courage of Conscience Award along with the Missionaries of Charity which she founded in Calcutta, India in 1950.  Her visit to the Life Experience School in 1988 led to the creation of the Peace Abbey Guesthouse which provided hospitality to people from throughout the world.  The Guesthouse closed in 2012.

There is no monetary value that accompanies this award, only the blessing that comes from receiving this prestigious recognition from a place whose mission is linking insufficiently recognized practitioners of nonviolent social change with the work of high-profile humanitarians. It is our prayer that this humble gesture of appreciation brings recipients together in ways that inspire further service and creativity and leads to a world that is increasingly peaceful, safe, healthy and kind.

The Dalai Lama received the Courage of Conscience Award at Kresge Auditorium at MIT during Harvard University Mind Science Symposium in 1990. Lewis Randa presented the Award with the students at the Life Experience School. Complete list of recipients below:

RECIPIENTS OF THE COURAGE OF CONSCIENCE AWARD